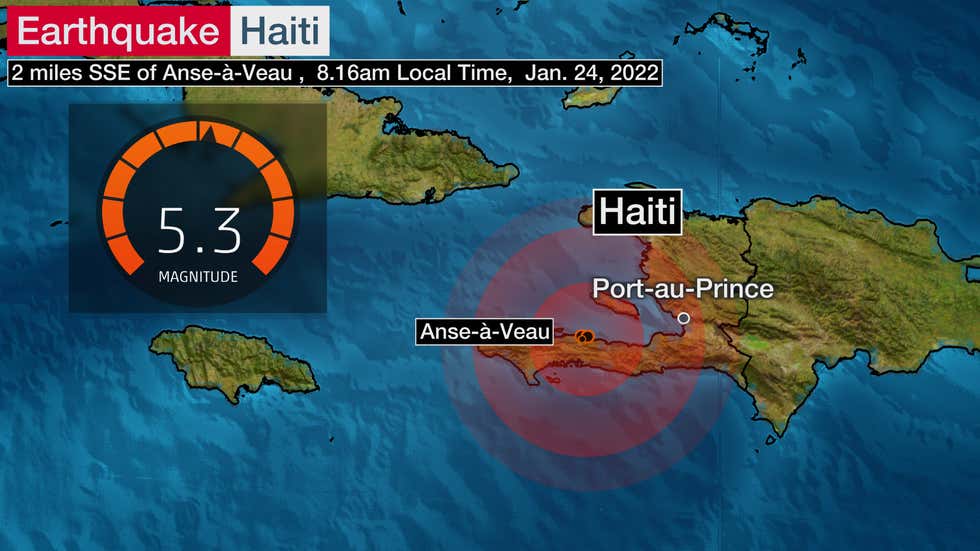 day, killing two people, injuring dozens of students and damaging hundreds of homes as it created panic in a region that was rocked by a powerful tremor that killed more than 2,000 last summer.

A magnitude 5.3 quake at 8:16 a.m. (1316 GMT) was followed by a magnitude 5.1 quake nearly an hour later. Both were centered on Haiti's southern peninsula, west of the capital, Port-au-Prince, according to the U.S. Geological Survey. It said both occurred about 10 kilometers (6 miles) below the surface.

Haiti's civil protection agency said at least two people died and dozens of schoolchildren were injured, adding that 50 people between the ages of 15 and 23 were in a state of shock and taken to the hospital. Officials said 191 homes were destroyed and 591 were damaged in one region.

Yves Bossé, an elected official for the southern department of Nippes, told The Associated Press that one person died when the earthquake caused a landslide at a sand mine. He said homes were cracked and businesses shut down for the day.

“People are scared to go back into their homes,” he said.

Sylvera Guillame, director of Haiti’s civil protection agency for the country’s southern region, told AP that schools in the area closed and sent children home as a precaution.

Prime Minister Ariel Henry offered his condolences to the victims and said his administration would fully support those affected.

A magnitude 7.2 earthquake struck southwest Haiti on Aug. 14, killing more than 2,200 people and damaging or destroying some 137,500 homes.